Ottoman Arcadia: The Hamidian Expedition to the Land of Tribal Roots (1886)

“Ottoman Arcadia: The Hamidian Expedition to the land of Tribal Roots, 1886” showcases, for the first time, a three-volume set of photographic albums that were prepared following a decree by Abdülhamid II and were eventually gifted to Otto von Bismarck, the chancellor of Germany.

In 1886, Abdülhamid II commissioned more than a dozen photograph albums destined for the Yıldız Palace Library. They were the result of an imperial decree that sent a documentary commission of court officials and artists to the earliest Ottoman settlements. Soon thereafter, three of these spectacular albums were gifted by the sultan to Bismarck, in commemoration of the political rapprochement between the two empires at the end of the 19th century. These albums later made their way into the Ömer M. Koç Collection in 2017 and they are the focus of ANAMED’s exhibition curated by Bahattin Öztuncay, Ahmet Ersoy, and Deniz Türker.

The albums reflect the accumulative efforts of the expedition team, comprised of prominent photographers and painters of the era. Their primary task was to document in detail the early Ottoman settlements such as the empire’s first capital city Bursa, as well as other cities like Yenişehir, İznik, Söğüt, and Bozüyük. The matted photographs and their elaborate handwritten notes in Ottoman Turkish and French provide detailed information not only on settlements, architectural structures, and the landscape, but also the semi-nomadic tribes with ancestral claims that resided in these regions.

“Ottoman Arcadia: The Hamidian Expedition to the Land of Tribal Roots (1886)” contextualizes the expedition as a remarkable instance where photography—a new visual technology of the 19th century—was merged with historical narratives to reconstruct dynastic myths and tribal memory. Visitors are able to travel through the exhibition, following the itinerary of the expedition and by tracking the making of the albums through an array of archival documents.

Virtual tour of the exhibition

The exhibition showcases, for the first time, a three-volume set of photographic albums that were prepared following a decree by Abdülhamid II and were eventually gifted to Otto von Bismarck, the chancellor of Germany. 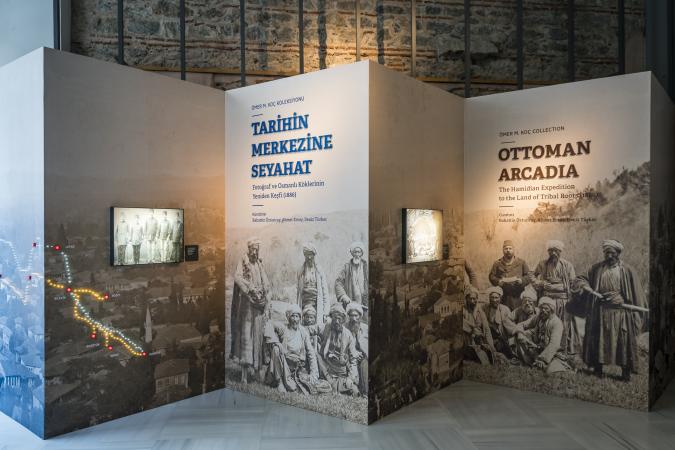 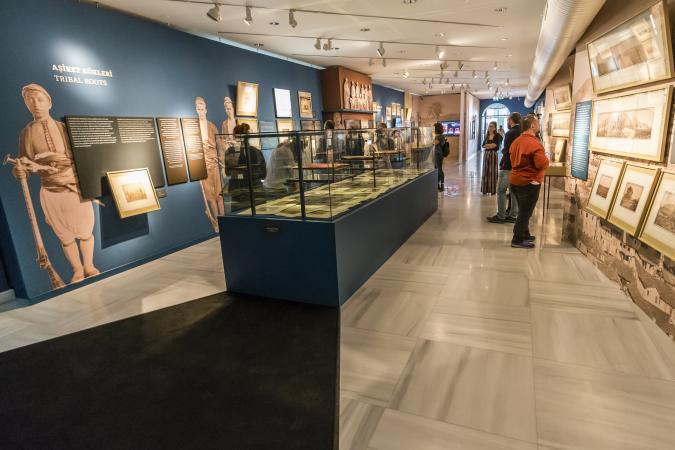 Next Event
END_OF_DOCUMENT_TOKEN_TO_BE_REPLACED
When you visit a website, information is stored in your browser, mostly in the form of cookies. This information may be about you, your preferences or your device, and is often used to make the site work as you expect it to. The information does not usually identify you directly, it is meant to provide you with a more personalized web experience. You can choose not to allow some cookies. Click on the different category headings to learn more and change our default settings. Cookie Notice
Necessary Cookies
These cookies are necessary for the website to function and cannot be turned off in our systems.
Statistical Cookies
These cookies are used to provide insight into how we can improve our service to all our users and to understand how you interact with our website as an anonymous user.
Targeting Cookies
These cookies are used to create your profile and provide ads relevant to your interests. It is also used to limit the number of times you see an ad, as well as help measure the effectiveness of the ad campaign.
Cookie Policy
Cookies are used to personalize content and ads, to provide social media features and to analyze our traffic. You can accept all cookies with the "Allow All" option or you can edit the settings with the "Customize Settings" option.
Customize Settings